Today’s post has been very kindly written by one of our students Angela Watson. Angela is studying the Illustrating Children’s Books Online Art Diploma Course with Maggy Roberts. Angela has written and illustrated ‘Emily and Ziba: The Shimmering Cave’ and so we asked Angela if she would write about it and her experiences for our college blog. We hope you all find it a fabulous read and very inspiring!

In March this year Emily and Ziba: The Shimmering Cave, a 32 page picture book I have written, illustrated and published was finally sent out into the world. I had always wanted to write for children and in February 2006 I began studying with the Open University. In June 2013 I graduated with a Bachelor of Arts. As part of my degree I completed Creative Writing and Advanced Creative Writing modules.

At this time I had an idea for a children’s picture book. In September 2013, with a view to illustrating the book myself I signed up for a drawing and illustration course at Surrey Adult Education. Not having any art experience when I started the classes I was amazed when, in June 2014 I submitted a pen and ink drawing into the end of year Surrey Adult Learner Exhibition and received a commendation.

Not long after this, a chain of ideas formed in my mind for a new picture book story. This was helpful as my original idea had not inspired me to even make a start! Within a week I had drafted and sketched out my story. I then created my main character, Emily; my first attempts were laughable but eventually with a lot of practice, I had my little girl.

In September 2014 I started work on my dummy book but due to my lack of experience I became overwhelmed by the challenge I had set myself. So I researched online, looking for courses specifically aimed children’s book illustration. This was when I discovered the London Art College’s Diploma. I signed up and put my own project on hold for a while.

The course was just what I needed. Between December 2014 and February 2015 I raced through the coursework and submitted five assignments. Even though I did not strictly follow the brief (sorry Maggie!) the feedback I received helped me to identify my weak areas, for example inadequate shading so my pictures lacked depth! Also, it helped me to settle on watercolour as the medium for my book illustrations. Armed with my new knowledge and experience I starting working on Emily and Ziba again and finally finished my dummy book in June 2015.

Having all my sketches ready to draw up as final artworks I used a lightbox to trace them onto Langton Watercolour Paper (NOT, 140lb) and then inked them in using a black Uni-ball eye fineliner pen. I decided to use White Night Artist’s Watercolours to finish the illustrations as I love the vibrancy they bring to a picture; how easy they are to use and best of all they are not expensive!

I finally completed all the artwork at the end of December 2015. I pushed myself to finish this project as in August 2015 my nephew (Sam), aged sixteen months was diagnosed with a high risk cancer. At this point I decided once the books were printed that for each of the first one hundred books sold, I would donate £2 to Rainbow Trust Children’s Charity. After which I would give 50p for every book sold. This was something I wanted to do as the charity gives vital emotional and practical support to Sam and his family.

My Story by Angela Watson

With Sam in my thoughts I wanted the book printed as soon as possible, so I decided to self- publish. I am glad I did as at the time of writing we have been told Sam only has a few months to live. My aim at this stage was to achieve the best quality product I could but for it to retail at £6.99; other than the cost of having the books printed I would do everything myself. So I researched printers and setting up as a publisher. I finally settled on a small printing press that would print my books on silk lined paper. Also, for only a small additional charge the printers took my ideas for the book’s layout and loaded my text and scanned artwork onto their system for printing. To complete the process I set up a publishing company so that I could be issued with my own ISBNs.

When all this was done I explored different web builder sites that were free as I needed a website to promote and sell my books. Eventually, I settled on WIX as I found it simple to use, it looked good and I could add a store, keep a blog and have a gallery with my portfolio. I also set up Facebook and Instagram accounts and have linked them to my website.

After everything was set in motion for Emily and Ziba: The Shimmering Cave I realised I still had not finished my Children’s Book Illustration Diploma. So I started work on assignment six. I decided to have fun and use my character Ziba as inspiration for my final piece!

The good news is not only have I now completed the course and received my Diploma, I have sold over one hundred Emily and Ziba picture books and written my first cheque to Rainbow Trust for £200; I have been interviewed by Radio Jackie and had a book signing at Barton’s Bookshop in Leatherhead. It has been an amazing journey and if you would like to read more about my story please visit my blog at http://angelaruthwatson.wix.com/books#!blog/g4msq 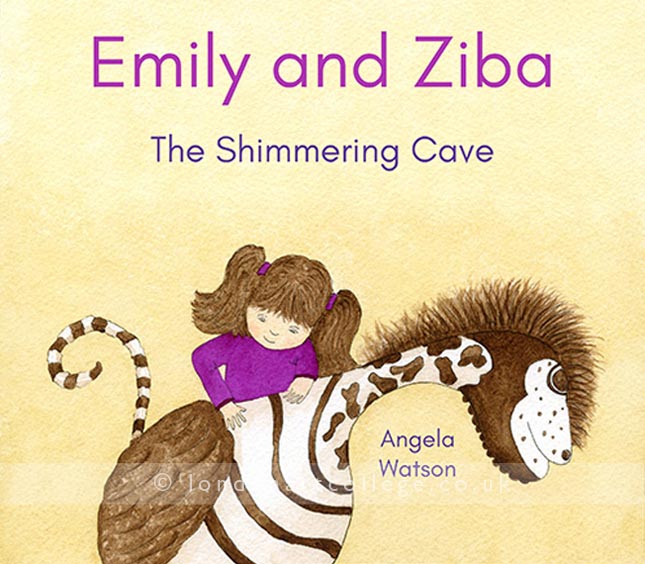 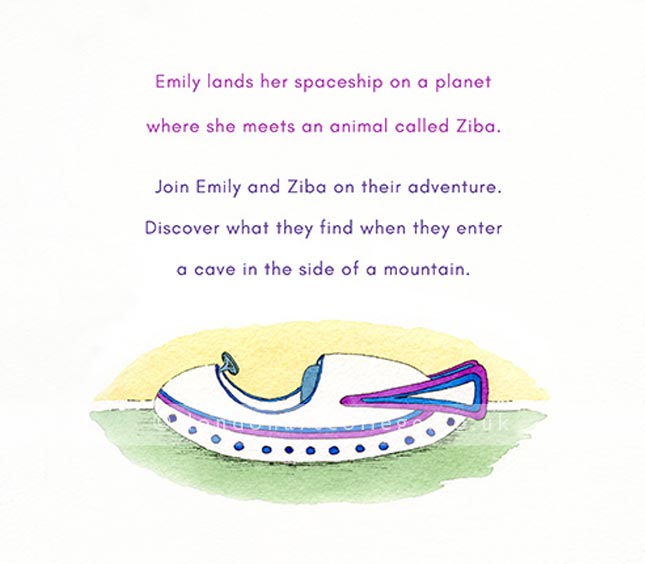