Victoria Edwards has just completed the Graphic Design Art Diploma Course  receiving a distinction. We would like to congratulate Victoria on working so well though her course and we are sure that she will go far in her creative endeavours. Vanessa Weaver, the Graphic Design Course tutor, asked me if I would contact Victoria to see if she would write about her final piece ‘Join The Dream Team’ for the college news blog. Victoria has written a wonderful and inspiring piece below which I know that you will all enjoy. I have also added Victoria’s ‘Join The Dream Team’ artwork below too.

I’ve been doing office work for almost 20 years in some variation or other, thanks to my mother telling me to take typing and office skills in school, as at that time she believed I was going to be a journalist and typing was a skill she thought I needed.  Unfortunately the journalism thing never panned out and the office skills became my fall-back career, and so my creativity fell by the wayside over time.

Five years ago I began working in a graphic design company as an administrator, and when we moved into doing more creative design oriented work, it piqued my creative streak again, and I began tentatively to draw here and there.  Then my partner bought me a drawing tablet and I taught myself to use computer software to draw.  After a while I decided that I would like to possibly change career and do something more creative, but I had no formal training to speak of and I began looking around for courses with a design theme.  Then I came across the London Art College, and each of the courses appealed to me in their own way, but the Art in Graphic Design course seemed to have everything I needed to get me started with my training.  So I signed up for that course at the beginning of 2012.
The course is very in-depth and explains everything in an easy to follow format.  My colleagues (qualified designers) commented that it even covered aspects of design that had been lacking in their own degree courses.
The brief for this particular task was to come up with my own poster for the product outlined in the previous tasks.  In the previous tasks we were introduced to the product – a bar of chocolate entitled ‘Dream’ which consisted of three cylindrical pieces of chocolate,each cylinder being one of dark, milk and white chocolate. This product was being marketed towards adolescents aged between 13 and 20. In the first instance we were provided with a drawing of a rocket and asked to create four different slogans for the product to go with the image.  One of my slogans was ‘Join the Dream Team’.
This particular task asked us to come up with the artwork for our own poster design including one of the slogans from the previous task.  I struggled initially as the age group it was meant to be aimed at was quite broad – as what will appeal to a 13 year may not necessarily appeal to a 20 year old.  Taking my slogan ‘Join The Dream Team’ I envisaged a design utilising the rocket from the original artwork, and possibly some characters who may have just arrived from another planet, bringing with them this new form of chocolate.  I also began to think that join the dream team would be a whole marketing campaign whereby customers could go to a website, Facebook page etc, and be involved in the world of these characters. Of course I still had to make it appeal to everyone in the set age range.  I like Jamie Hewlett’s art style, and realised that Tank Girl, and Gorillaz both appeal to teenagers and adults alike, so from this I decided to draw my characters in a similar style.
I sketched out the initial characters in pencil, using stock photos from the web as a guide to body positions and then scanned them into Adobe Illustrator, and outlined them using my tablet.  Once I had the characters outlined to a point where I was happy, I then copied them into a new document in Adobe Photoshop. I had previously scanned and outlined the rocket and moon drawing, so I copied this onto a new layer, and moved it around until I was happy with the position of it in relation to the characters.
Then I had to choose colours for the characters and their outfits.  I decided to use muted versions of red green and yellow, with each character wearing all of the colours, but each one different from the other. I chose that each of the characters would represent one of the pieces of chocolate, and made their hair colour represent that chocolate choice.
The original outline for the product said that the packaging was a rainbow coloured tube, so I chose to use the rocket to represent this, and made it bright and multi-coloured.  I found a free font similar to the Gorillaz typeface and added a black stroke and filled it with the same red as the rest of the piece to give a comic book effect.  I added a gradient background going from a dark blue-grey to a light blue-grey to indicate the sky, and used the star shape tool to add some stars to the background.
Then I put a rounded rectangle shape next to each of the characters and filled them with dark brown, a very pale yellow, and a medium brown, then I added a slight texture to make each one look like a piece of chocolate.  I used comic sans font to write a description on each piece, as it was easier to read than the main font, but again added a black stroke and filled with red, to maintain continuity.
Finally I added a drop shadow blend to everything just to make it all pop from the page.
Now that I have competed this course I will continue drawing and designing in order to keep improving, and hopefully change career in the future.
Victoria Edwards (Graphic Design Art Diploma Course D3) 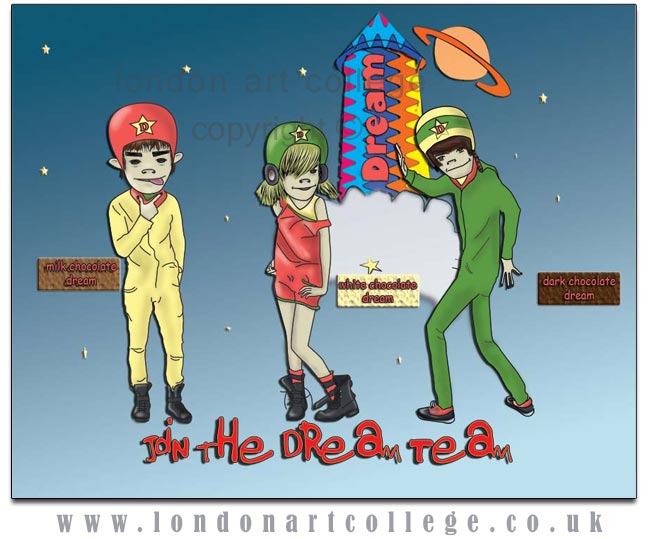