I’m Emma and I’m currently studying on the Children’s Book Illustration Course – and really enjoying it! I’m only really at the beginning of the course and have just sent off my first submission, a brief in which we had to do a double page spread for a children’s nursery rhyme book, specifically for the rhyme ‘Row, row, row your boat, gently down the stream. Merrily, merrily, merrily, life is but a dream.’

Initially I thought about doing the character in the boat as an animal, but after consulting my three year old daughter (since she‘s pretty much the target audience) on what she would like to see in the picture I was informed quite firmly that it ought to be a child, and who was I to argue! I decided to draw a boy, as I read somewhere that although little girls will happily read books about girls or boys, boys tend not to read books about girls – whether that’s the case I’m not sure, but it made my mind up for me. I did pop a little girl on a picnic blanket in the background though.

I really enjoyed drawing out the picture in pencil and using my imagination for the magical landscape and characters. I wanted to give a sense of the child rowing from an idyllic daytime scene into a magical dream, so I had a think about how to approach that and decided I would create a ‘dreamscape’ on the right hand page where the trees had morphed into lollipops and cupcakes, and the boat had turned into a bed in which the child would be sleeping as he sailed into his dream. One of my favourite things about constructing drawings are the details in the background, I like to have plenty of things going on to look at, so I included plenty of birds and animals, which were normal on the left hand side but magical on the ‘dream side’ – so I popped a couple of frogs playing a lullaby on a violin and flute to lull the boy to sleep, and a frog tucking into an iced doughnut on a lily pad, birds in dazzling colours, and decided to have a flew brightly coloured fish flying out of the water and into the dream. Steering the little boat was a pirate owl and his pirate duck sidekick. And just for good measure and an extra dollop of magic I popped in plenty of twinkly stars and a rainbow. 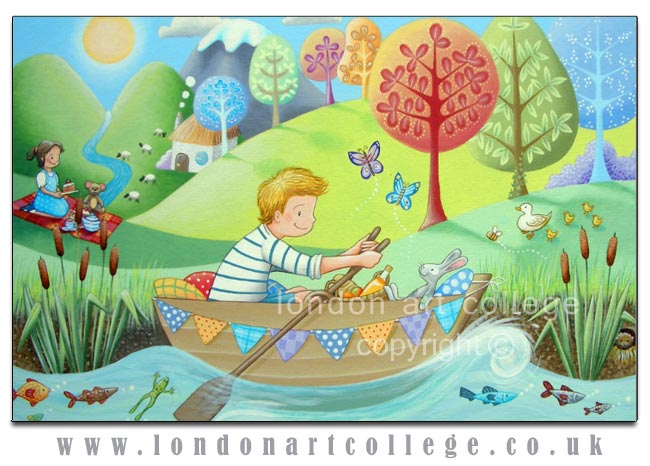 The painting is acylic on card. I use the paint relatively thickly so as to achieve nice smooth colours and blends, and every part of the painting has been built up in layers of paint to achieve that. I started with the sky, then the hills and grass, then the trees. Somehow though it’s really when I start filling in the details and adding a few delicate outlines to things that the picture really comes to life – and that’s the part I most enjoy painting. The only drawback to having so much going on in a picture is that it’s quite easy to miss something – even after I thought I’d finished and had packed my paints away I realised one of the small trees in the background was missing a shadow, so out the paints came again. 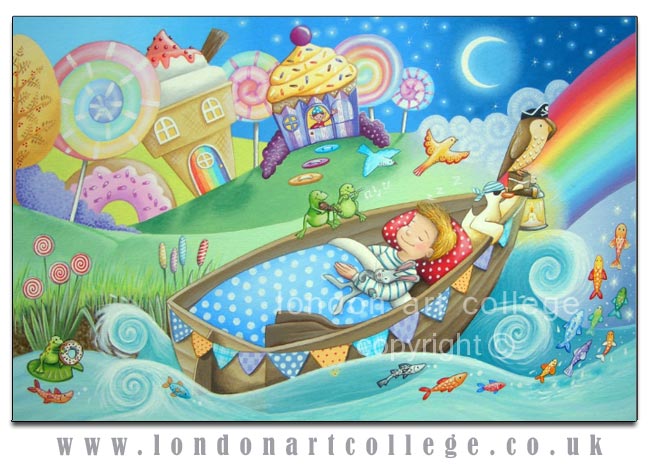 The part of the picture I found most difficult to draw was the boy – the tiniest error of drawing seems to age the child massively, and that is something I will be practising a lot as the course progresses, how to achieve the age of the character that I want to. Tricky! The part I found most difficult to paint was the cupcake house – I just wasn’t certain what colour it should be. The part I enjoyed painting the most were the little detailed characters, the owl and fish and frogs etc, they don’t take long to paint in comparison to the background and they add instant interest to the picture.
I’m really looking forward to the rest of the course, and I hope it will help me on my way to achieving my dream of illustrating for a living.
Emma – Illustrating Children’s Books Diploma (D6)