We asked if Swantje, who is currently studying with Maggy on our Illustrating Children’s Books Diploma (D6), if she would be able to write something about her wonderful Illustration of the Pelican taking flight. I hope you enjoy reading Swantje’s text and find her experiences with watercolour helpful and interesting.

I’m Swantje from Germany, studying Children´s Book Illustration with Maggy Roberts (working on the last exercise right now) and really enjoying it. Melanie asked me to write a bit about some of the pictures I created for the course and I decided on my ‘pelican’ picture which Maggy and I both like a lot. Hopefully you’ll find this useful!

I´ve chosen the ‘pelican’ because I used a special kind of watercolours here that is not so well known. The picture itself is part of the 3rd exercise concerning animals in motion.

I started out like I suppose everybody did, with research drawings of different animals: Dogs, birds, a caterpillar, many sketches of our cat at home  … searching for the one sketch, one animal than would feel just right for the exercise.  And then there was this picture of a pelican in one of my photo books, and suddenly, I remembered how I’d spent many hours in the zoo one summer with my sketching book, watching and drawing these big birds walking around and swimming. And now looking at the photo all of a sudden I wondered how hard it must be for a young pelican to learn how to coordinate this big beak and these wings and feet – and how funny it must be to watch him learning just that! With this in mind I started to draw.

I made sketches of the pelican doing different moves like lifting one leg (in that special way birds do, you know), spreading his wings, and so on. Soon it looked like the bird was sort of dancing around on my paper. A story seemed to want to tell itself in these sketches,  about a young pelican who wants to become a dancer, with nobody backing him up but his friend, a little crab. But though I liked that story (and the crab), while my pelican on the paper fell over his feet again and again I felt what he really wanted to do was to fly. After all, that’s what becoming an adult bird is really all about, isn’t it?

So finally,  for the coloured picture I chose the moment when the young pelican is able to take off for the first time – of course together with his friend the crab!

Concerning the technique, I didn’t think too long about that. Watercolours it would be! I’ve been using watercolours for many years now and I’m really sort of into them. Which is strange, because at first I didn’t like them at all, not to say I really hated them. When I was younger, I was rather one for drawings because I felt like I couldn’t control these running, floating colours at all. But whenever I took a closer look at pictures of artists I liked I realised: They were created with watercolours! I wanted to catch this magic I found in their works in my pictures as well. So after a lot of hesitation, I took the brush instead of a pencil and since then have kept on going. And now I really can’t imagine to live without these beautiful colours. (But of course I didn’t give up drawing completely.)

But although I’m quite set on the medium, I’m still experimentating  with finding ‘my own’ way of painting. And, to get back to the pelican, because I knew this would be a picture with not too many coloured details and background, I thought it was a good one to try out a type of colours I’ve heard of but did not paint with before. These special colours (‘Aquacryl’) can be used like watercolours but the difference is that the binding agent ist not gum arabic but modified acrylic instead. I was really interested to see which effects this would have on the picture, and because these colours are probably not too well known, I shall tell you a bit more about my experiences with them.

Before starting with the watercolours though I used coloured pencils for the contours of the bird  – a bit nervously, especially with the orange, because it is such a ‘decisive’ colour. But I thought it might be a good way to make a  picture with a mainly white bird more vivid and also catch a bit of sunlight on the wings. Then, taking the new watercolours and moving on to doing the shadowed parts on the bird’s body and the bright ones on the beak and legs I found out that the  ‘Aquacryl’ colours are very, very bright if you use them without mixing them too much. Really brilliant colours! And one can also easily wash them out in lighter areas because they stay on the surface of the paper and do not sink in like others. On the other hand, because of this property of the colours it felt like I was almost ‘pushing’ them around at times. It took me some time to get used to this, but overall, I really liked the general effect. Maybe I got a bit carried away with my success at that time …

When the animals were almost finished, I felt the picture still looked quite empty somehow. So I decided to put in a hint of clouds and blue sky to show where the pelican is about to go. Thinking this would be the easy part I only wanted to put a layer of clean water over the blue to even it out a bit, like I’d done before with other watercolours. But instead of gently flowing into each other, suddenly all the sky colours started to move on the surface of the paper! (You can still see it in the final picture.) This was when I decided that I had done enough experimenting for now, and finally left the pelican and his friend alone.

Still, I’m really satisfied with the picture and with my little colour experiment as well. I think I´ll basically stick with  my ‘ordinary’ watercolours but I’ll definitely use the new ones from time to time. Trying them and realising that although they can be difficult to use for certain techniques, on the whole I was able to handle them well after a bit of trial and error gave me quite a boost of confidence. Great side effect, don’t you think? 😉

Best wishes to you all – Swantje 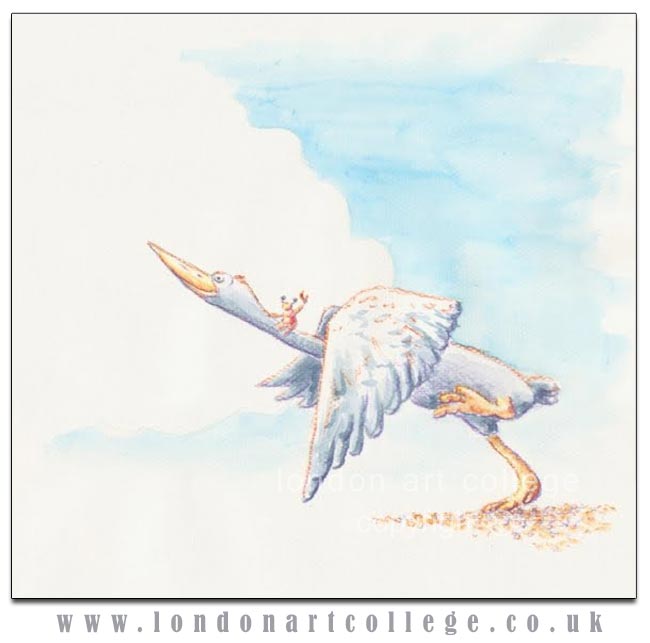