A wonderful post from Eleanor Patrick who is on her third course with the London Art College. Read on and View Eleanor’s work to find out more……..

I enrolled on the Digital Illustration course when I was still working through the Children’s Book Illustration diploma. The reason was that I was using a digital app (Inkpad on the iPad) for the Fiery Fred (dragon) assignment and thought the two courses would work together to help me progress. I did the final Children’s book Illustration assignment digitally too. By then I was well on my way with Spencer Hill’s course.

Doing this was simple in one sense because I had a graphics tablet and stylus and used them regularly (it can take some getting used to if you start from scratch), and difficult in another because the course wanted us to submit in Gimp, which meant using it! I hated it at first and still prefer Manga Studio and Photoshop – but me and Gimp, well we’ve made our peace. It can come in useful at times. Like an old paintbrush you’ve mangled to death and hate but which can still make a beautiful hedge in watercolour.

I was already on the course before the assignments changed to being more directive, and Spencer was great about allowing me (us, presumably) to submit whatever fulfilled the criteria, which was to prove we could use the tools well.

I started off tentatively and really simply, not knowing quite what was expected, and one of my assignment 1 pieces (to show opacity and depth in black and white) was a simple tree.

By assignment 3 I was going a little bit mad and needed to use dodge, smudge, burn and blend along with everything else learnt so far. I sent Spencer three such different pictures he must have wondered where I had emerged from. I just hadn’t settled on a digital style yet. My favourite was the alien hound, but Spencer liked the girl waiting on the platform and put it into the college gallery, so I took that as a hint about direction.

At one point I borrowed a still life from the Children’s book Illustration course (courtesy Maggy Roberts) and produced it digitally. One thing I found I liked doing was to start in my real sketchbook and then bringing it into Gimp and continue from there. The boy waiting at the bus stop started that way. (I draw a lot of waiting people while they’re not looking. The others scare me to death!)

Assignment 6 has to be done using the vector software Inkscape, which I found non-intuitive. I now use the new Affinity Designer app – but I do like what vector does for digital art in terms of inking drawings and being infinitely expandable without loss of definition.

I have a long way to go but have just joined the recently advertised Illustration Diploma which ranges much wider than both Children’s book Illustration and Digital Illustration and can be done in traditional or digital media. I am looking forward very much to getting to grips with this. 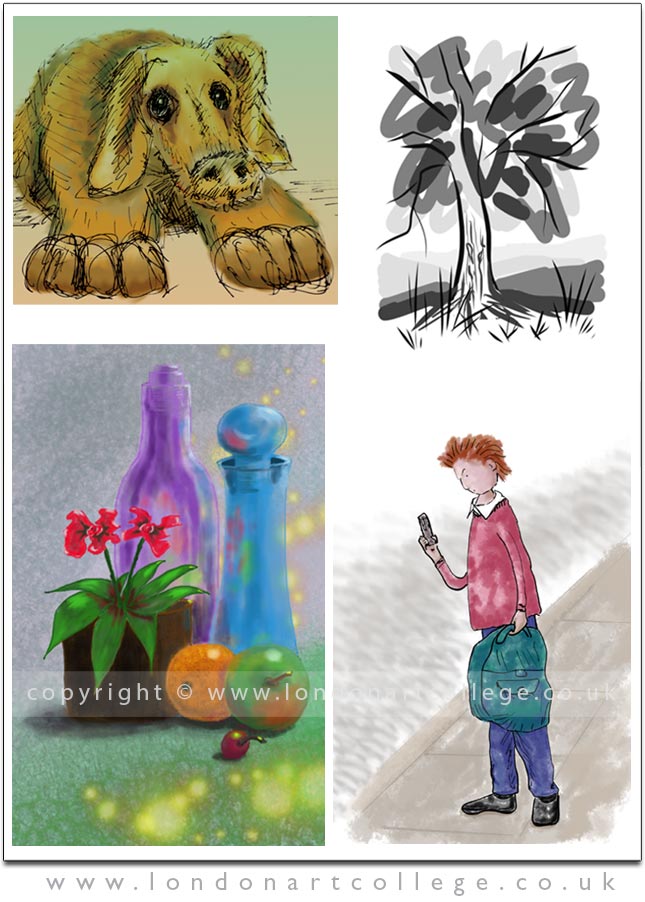